skip to main | skip to sidebar

so what's a good way to take my mind off things? doing my blog, apparently.
i decided to write about the recent cny break. i had a whole week off, and it was jammed pack. i warn you it's going to be a long entry (ahaks) but i promise to write as short and simple as possible. first, i dont want to bore my readers, second, i dont want to spend too much time doing this.
cny break was a blast. sadly it has to come to an end, like every other things that occur around us. so, what did i do during the week off? PLENTY.
ok, it started on thursday. my initial plan was to leave the uni very early morning, like 5 or 6 in the morning, so that i would reach kl by noon. i dislike driving at noon, cause it would make me sleepy. unfortunately, i had to attend something compulsory that thursday morning, which resulted me to start my journey at 10. what to do, got no other choice. better noon, than night time, right? like before, i do my travels mostly by myself, and driving at night can be unsafe. anyway, the journey back to kl was uneventful. stopped several times at regular places, to fill up for petrol, toilet breaks and of course, to get some coffee to keep me awake.
reached kl at 5pm. went straight to ampang to my mother's new house. it was gorgeous! just the right size, i know mum wouldnt like the house to be too big and then too hard to maintain. the first hour was spent wondering around the new house, chit-chatting with mum along the way.
my fav part of the house is the kitchen. love the white 'n chrome kitchen cabinet. love love the island in the middle. love love LOVE the built-in fagor's fully chrome set of microwave, oven and stove as well as the thing that sedut asap masak tu (dono what's called haha). mum surely got taste i tell you. 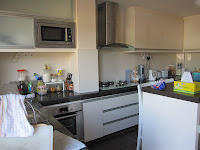 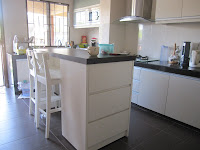 my current wallpaper ;). i simply adore the island in the middle of the kitchen! however, mum is not satisfied over the white kitchen cabinet wall, so the kicthen cabinet people will come back again to re-install it after raya cina hols, this time to change it to, wait, transparent glass 'n chrome. whatever you want la mum haha 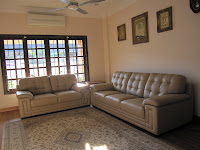 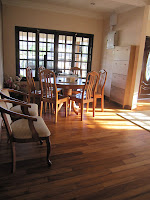 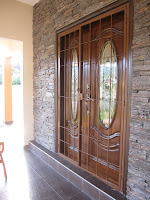 front door. love the front wall! dono what it is called tho.. bread-layers? dono 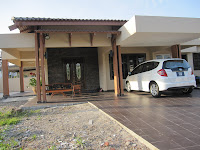 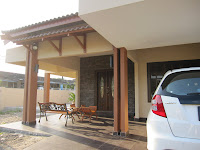 front look. notice mum's honda jazz? byk2 kete, honda jazz gk die pilih. if i was given a choice, pilih la bmw 5 series ke, paling kurang mini cooper ke. not that she has the licence to drive lol. yup, it's her car, but she cant drive it haha 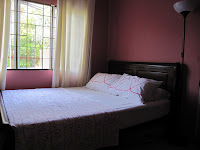 my room. pink! i toned it down with a white bed sheet. actually in real life the wall colour looks softer. 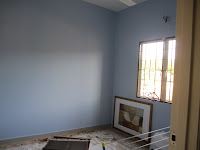 kak lysa's light blue room. her bed set is due to arrive this week, i think.

actually byk lagi pics, but too lazy too upload haha

the rest of the house was equally impressive. mum finally got her dream of wooden kayu jati floor and window frame for her living room. however i didnt expect her new sofa to be quite, how you say it, 'clean n simple', cos i thought her usual taste would be, how you say it, 'extravaganza' aka ala mak datin taste haha. and her rm7k bed (just the bed, not include any wardrobe or make-up table) is also quite simple. i would expect it to be like kerawang2 or gold-plated ke haha. anyway, later my sis, kak lysa, told me that mama did most of the furniture shopping with her and she managed to sort-of 'tone down' mum's 'extravagantness' haha. well, as long as mum's happy with her final choice, it doesnt matter to me. it is her house afterall, her final house where she plans to spend the rest of her life at, so it is crucial that she gets whatever she wants. and she DID get everything that she wants, mind you. and you dont want to know how much she spent on the new house haha. all that i can say is that if she wants something and has the money to spend it, then just spend it lor.

ok. second day: friday. oh yeah, hubby also likes the new house, mainly for its location. the house is literally 10 minutes away from his workplace. plus all of my siblings and i were given our own room, so we can have our own privacy if we want to. also with the new bibik (who is so so nice, capable, rajin gile, pembersih sgt and pandai masak, thanks to my uncle who recommended her), so the house is always clean, clothes already folded and ironed (including hubby's!) and cooked food always on the table, so no wonder hubby loves being there. plus he knows i love being with my family so he and i decided to stay over my mum's house for the whole week that i was off.

on friday morning also i had to drive iwan, my youngest bro, to glenangle hosp for his final chemo session. kesian die, sure akan lembik for the next few days. on friday also i helped clean and arrange the new house. especially my room, which was full with sealed boxes from my previous room in kuantan (tell you my stuff is all over the place). then friday afternoon i drove to subang (hubby's off to work that day) for i missed my niece and nephew, maisarah n harith. rindunye kat budak2 kecik tu! after much kisses and hugs and lots of playings, i returned back to ampang later that evening.

on saturday i was supposed to go to kedah to attend a friend's wedding and also to visit hubby's sister who asked him to buy a desktop for her small daughters, but then with the reported traffic jam at the north-south highway plus mum's desperate need to do further house appliances shopping, hubby decided to postpone our trip by one day despite my protest :(. i had promised this friend that i would attend her wedding, and now i couldnt make it. muncung satu hari haha. but then i realised it is my responsibility to be there for my mother, who has no one but her children, and also to be by my husband's side.

on saturday morning hubby and i joined mum and kak lysa to ikea. mum decided to get almost everything new for her new house, and that includes from shoeracks and hangers, to containers and storage boxes and everything else that is available in ikea haha. spent a few hours there, had lunch there too (meatballs! yum yum) and returned ampang to continue unpacking more stuff.

on sunday hubby n i left for kedah. left at 10am and it took about 6 hours to reach kuala kedah. boringnye ikut highway! halfway through i had a migrane attack :( so i couldnt take turns driving with hubby. reached kuala kedah at 4pm and hubby's sister, kak nira, who is very nice n friendly, took us around the place.

kak nira was dissappointed that we had to leave the next day. her husband, who is a marine policeman, even had a plan for us to go to songkla, thailand, for a day visit as they thought we would stay longer with them. we wished we could stay longer but we couldnt, as my siblings and i already plan for a surprise belated birthday party for mum on the day we plan to return back to kl. before we left, we promised to come back again to kedah after my final exam in april, where we can stay as long as we want. 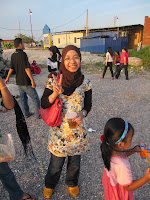 somewhere in kuala kedah. too lazy to post other pics haha

hubby and i reached ampang on monday evening, straight into mum's birthday party. kak lysa bought a super nice, custom-made cake in a shape of a big mushroom house from secret recipe for mum. all of us were there, all of her 4 children, along with 3 menantus and 2 grandchildren. we also invited mum's beloved sister (my aunt) and her family. 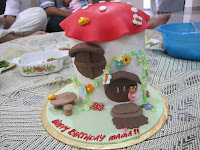 tuesday was a very special day. hubby and i went out on a date, ie post-valentine date. we went to sunway pyramid and planned to catch a movie, but the cinema ticket queue was too long, so our movie date had to be postponed. and then hubby said he wanted to buy me some clothes, much to my delight. me like shopping treats! he also bought me half a dozen of red roses, my favourite flowers :D. so there i was, holding hubby's hand on one side and a bouquet of flowers on the other, walking side by side, and going from one clothes shop to the other, talking and laughing to each other.. such a heavenly experience! it was one of the happiest day in my life..

(mueheheh takde kaitan with the eiffel tower or the movie.. just felt like it was such a romantic thing to say haha)

oh yeah i choose a cute white lacy short dress and hubby likes it too ;)

on wednesday hubby had to go to work. while he was at work, mum and i went to jaya jusco au2 keramat to do some food shopping. iwan still lembik from his chemo, so he stayed home with the bibik. i also baked not one, but 2 banana cakes! it was because i could not find a big enough baking tray, so i had to use 2 small baking trays instead. and yeah, i officially rasmikan mum's new oven hihi

on thursday mama wanted to go to ikea so we once again went there. after another big expenditure, we drove back with the car full of ikea stuff. then later that day we went to jaya jusco keramat once again, for more food shopping.

friday was my last day in kl before my trip back the next day. i decided to pay klcc a visit; it has been a must place for me to go everytime i goback to kl. i know almost every shops in there, in and out haha. it's located only a 10 minute drive from our house in ampang, and with the akleh (ampang-kl express highway) it would go straight into it's underground parking. very easy meh! mum then decided to join me, and later on kak lysa too during her lunch break. then in the middle of our window shopping, mum felt very generous and decided to give me and my sister a treat each. kak lysa decided on a very nice pink and grey chequered shirt dress by mng. whereas i, for some reason, found it hard to choose. finally i decided on a green shirt as i dont think i owned any green shirt yet. thanks mama!

later that night, on my final night in kl, hubby brought me to watch a movie. i thought of watching valentine's day, but i knew hubby would be happier to watch percy jackson & the lightning thief, so i compromised, since i too like that kind of movie genre. it was a fun movie, but the best part was that i had the best company :)

drove back to the uni the next morning. got hit by a flying rock (!) and it smashed my front plate number. only realized it when i reached my uni later in the afternoon. lucky it didnt smashed the car front glass huh. i was only managed to get it fixed yesterday, after asking around for a shop that can fix plate numbers.

anyway, that's all from my cny break. ok ok i know i know it's time to go back to my books again..

ellyz
Gratefully blessed for what I have, with a hope to face the world as it is, one day at a time..